Video: Chairman Fred Hampton Jr. - The War Of The Words 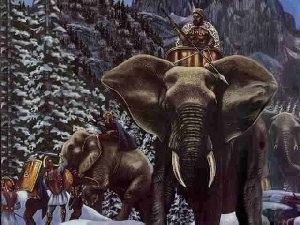 Viewing the History television channels version of Hannibal of Carthage and the conquests of Rome. In which they went as far as to detail the geographical location where the elephants came from, ie; central Africa, India. However, had no images of African people. In fact Hannibal, his family and troops were depicted as white people. This fraud fronting as facts was/is similar to watching the ruling class and its representatives; white people and much of the white left included. Put out there chosen spokespersons to represent such revolutionary organizations as the Black Panther Party. With it being either the typical Great white hope saviors of the slaves or milk toast negroes whom are under white folks control. Or even that of the ones whom the ruling class and its media and propaganda machines portray to our community as community activists, spokespersons, etc.. Which can be assessed as nothing less than fiction and bullshit. Or rather state shit.
-Chairman Fred H.A.M.pton Jr. POCC/BPPC. WE RIDE!
Posted by Chairman Fred Hampton Jr. (POCC/BPPC) at 3:24 PM No comments:

Stuff They Don't Want You To Know - The Black Panthers

Rhetorical question.. Why is that when Black youth throughout Englewood, North Lawndale, etc. throughout Chicago. Are referred to as gangbangers, etc.. However when referencing to the Northside, downtown, and other areas where white offenders are involved. Terms such as "problem youth" or some other media friendly euphemism is utilized by white riling class press as well as the notorious negroe press?
-Chairman Fred H.A. M.pton Jr. POCC/BPPC 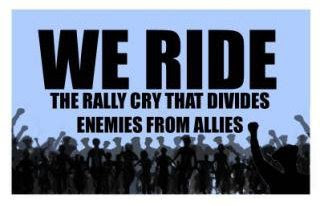 Anyone that believes the Police are interested in stopping crime. Is open to believing that Don King wants to stop boxing".
-Chairman Fred H.A.M.pton Jr. POCC/BPPC Free'em ALL! WE RIDE! Prisons A.K.A. Concentration Camps of America
Why are so many Black Men In Prison? For The Same Reason So Many Were In Slavery!
by Naim Muhammad
Posted by Chairman Fred Hampton Jr. (POCC/BPPC) at 9:49 PM No comments:

Kevin Costner and the Continuing Counterinsurgency

Everything is political. Including, in fact in particular that of Hollywood. Upon recent viewing of a showing of the History Channel piece entitled Hatfield's & McCoys. That prompts itself as an historical account of the infamous long played out battle of two working class white families during the 1800's. Amongst other things that alarmed me was the fact that although thus far the film has depicted details. Such as what part of Virginia the families were in, what laws were to be enacted if on the Kentucky border, etc..  It even attempts to portray some of the usual John Wayne drama such as the honorable Wild West codes adhered to by the White Men and Women of the Wild Wild West. The bible toting hard working ethics of Europeans making their way through the frontier.  It gives a slight mention to the historical falsehood of "Indians" scalping. A contradiction that flies in the face of the documented fact that it was in fact White people doing the scalping.  In which the Apache scalps garnered up to 25,059 dollars a piece upon turn in to the colonial officials. As in the case of Hollywood, their fictional flicks, and their propaganda machines. From Birth of a Nation, Tarzan, Seinfeld, Losing Isiah, Blindside, Oprah Winfrey, The Green Mile, Dog the Bounty Hunter, to Capitalist commercials. African people are either whited out of history, reduced to some subervient minor act, and/or dependent upon the great White hope to save our savage souls.  The Hatfield's & McCoys supposedly shows the times and travails of the 1800's in North America, what is to later be recognized as the United States of America. The land stolen from the Native Man and built by the African. and the only sighting of a Black person is a brief showing of a midwife when a White Woman is in the process of childbirth. A cartoon would look crazy, lest lone so-called historical account. That portrays timber being cut, land being plowed, bread being kneaded, etc. and not a slave in sight?! Actually this should come as no surprise from a key player in the white washed versions of Government conspires, to the pale face who dared to Dance with wolves, to the Bodyguard of the African-American damsel in distress Whitney Houston. Who was able to come back in reality with his cape. And be keynote speaker at her funeral in which fellow Black artists such as Jaheim were denied entry. And even the father of her child. Bobby Brown was barely allowed entry to her home going services. In the words of the late Gil Scott Heron, one has to ask...Hollywood or Hollyweird?
-Chairman Fred H.A.M.pton Jr. POCC/BPPC. WE RIDE!
Posted by Chairman Fred Hampton Jr. (POCC/BPPC) at 9:41 PM No comments:

Thousands of people poured into this city by the lake on the May 19-20 weekend. A few were high officials, prime ministers and presidents. They came to attend the summit of the North Atlantic Treaty Organization, a military alliance of the United States, Canada and Western European powers. Hiding behind masses of heavily armed police, they wined and dined and plotted new wars against poor people in Africa and Asia.
Many thousands more, working and jobless, students, retirees and military veterans, came to protest their plans for endless wars and endless war spending. Several hundred among them also came to attend a different summit meeting. Mostly young and mostly people of color, they packed El Centro Autonomo, a community hall in Chicago’s largely immigrant Albany Park neighborhood.
The theme of the May 19 assembly was “Unite with the Global 99% Against Monopoly Capital, the Source of Economic Crisis, Racism and War.” Their purpose was to launch the United States Country Chapter of the International League of Peoples Struggle.
The ILPS could be called the anti-NATO. It unites nearly 400 mass organizations in 43 countries on six continents. It represents workers, peasants and fishers, students, indigenous people, the urban poor, environmentalists, human rights lawyers and advocates, antiwar activists and fighters for women’s and queer rights. With all their diversity, they are united in seeing imperialism, the global system of monopoly capitalism that is centered on Wall Street, as the primary enemy of working class and oppressed people all over the world.
The U.S. Chapter of ILPS was launched by 28 local and national member organizations. They included the International Action Center, the U.S. branch of the Philippine mass movement Bayan (New Patriotic Alliance), the Philippine womens’ organization Gabriela and youth organization Anakbayan, the People’s Organization for Progress, the Palestine Youth Movement, the Committee to Stop FBI Repression, Solidarity with Iran, Alianza Boricua, the Michigan Emergency Committee Against War and Injustice, and Chelsea (Mass.) Uniting Against the War. It will join four other ILPS country chapters in the Philippines, Indonesia, Australia and Canada.
‘Gathered beneath brightly painted murals and banners, the assembly was opened with a Skype message from the league’s chair, exiled Philippine revolutionary leader Jose Maria Sison. He said, “We appreciate the significance and urgency of the theme of your assembly: ‘Unite with the Global 99% Against Monopoly Capital, the Source of Economic Crisis, Racism and War’; build a brighter future that is ours! You are responding to the challenge posed by the rapidly worsening crisis of the world capitalist system. It is imperative that you raise the level of your unity, organization and militancy in line with the anti-imperialist and democratic struggle of the people of the world.”
The assembly was welcomed to Chicago by Chairman Fred Hampton Jr. of the Black Panther Party Prisoners of Conscience Collective. Hampton is the son of Illinois Black Panther Party Deputy Chairman Fred Hampton, who was murdered in his bed by a Chicago police death squad on Dec. 4, 1969. Hampton put the massive mobilization of Chicago police to terrorize anti-NATO protesters in historical context. He also noted that May 19 is the birthday of peoples’ heroes Malcolm X and Ho Chi Minh.
Other speakers included veteran Chicano activist Carlos Montes, who cofounded the Brown Berets in 1967; Hatem Abudayeh, of the U.S. Palestinian Community Network; and Minneapolis antiwar activist Stefanie Yorek, of the Freedom Road Socialist Organization/Fightback. All three have had their homes raided and ransacked by the FBI and their property confiscated. Montes was framed on phony felony charges and goes to trial June 20.
ILPS General Secretary Malcolm Guy of Montreal delivered solidarity greetings from the Canada chapter. He told the assembly of the heroic three-month strike being waged by students in Quebec and of the fascistic emergency law imposed to try to suppress their struggle. Venezuelan Consul General Jose Rodriguez y Espinoza also addressed the assembly.
Then the youth and veterans who packed El Centro moved on to the main task of the day: launching the U.S. Country Chapter. During several hours of discussion they adopted bylaws, resolutions and a general program of action that made clear ILPS-US will be an activist organization focusing on anti-imperialist education and mobilization. A country coordinating committee, headed by Kuusela Hilo of Bayan USA and Bill Dores of the International Action Center, was elected to implement the chapter program.
On May 20, ILPS members helped lead a militant and disciplined national liberation support contingent in the 12,000-strong march on the NATO summit at McCormick Place. Kuusela Hilo of ILPS co-chaired the rally with Joe Iosbacher of the Committee to Stop FBI Repression.
Posted by Chairman Fred Hampton Jr. (POCC/BPPC) at 5:26 PM No comments: